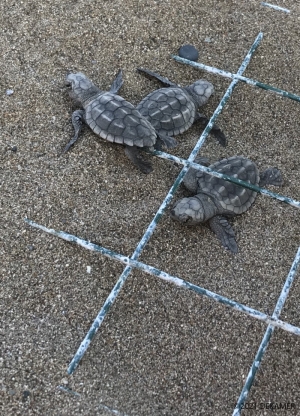 As the last sea turtle nests are about to hatch along the Mediterranean coastline, a tribute to those working on the beaches seems only fair. Hatchlings do have their guardian angels in those who carry out beach patrols, monitor nests, run conservation programs, coordinate volunteers, report violations and do so much more to safeguard the beaches and ensure uninterrupted nesting activity. Huge credit is due to all those who strive to protect sea turtles – an emblematic species for Mediterranean marine biodiversity.

But one can’t act alone! It’s a tricky and challenging process to protect a highly migratory species like turtles. Synergies and partnerships are necessary to achieve efficient conservation across the Mediterranean Sea.

Nine direct partners and numerous local partners, ranging from NGOs, conventions and public authorities spanning 12 countries, collaborate for the Conservation of Marine Turtles in the Mediterranean Region project. Thanks to funding from the MAVA Foundation, project teams could work on the beaches, in scientific labs, in policymaking meetings – “fighting” for turtles.

Summers are different for “turtle people” and 2021 was no different.

In Albania, MEDASSET initiated training for protected area staff to manage sporadic nesting and a drone survey to study the sea turtle population in the Drin Bay. In the northern Aegean, a field survey was undertaken, covering a major part of the Greek coastline to assess beach suitability for sporadic nesting. Data analysis will enhance our knowledge of sea turtle marine distributions and evaluate sea turtle nesting habitat and activity, and the possible implications of climate change. 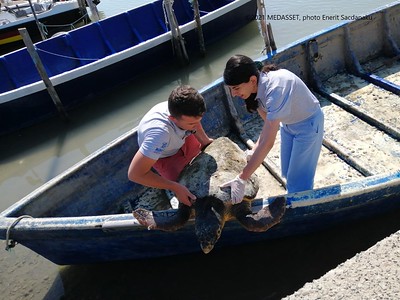 Greece hosts approximately 45% [1] of Caretta caretta sea turtle nests in the Mediterranean. Apart from the monitoring and nest protection in the country’s major nesting habitats, ARCHELON conducted extensive fieldwork in the Amvrakikos Bay (in the Ionian Sea, northwestern Greece), with the aim to increase scientific knowledge on sea turtle distribution, movements and migration routes. ARCHELON uses the rodeo technique to capture turtles, which are tagged, satellite tracked and released directly back into the sea. As a result of the 2021 fieldwork efforts, 5 adult male turtles were satellite tracked, while 299 turtles in total were captured, out of which 81 were neophyte (i.e., were never spotted before in the habitat).

When the WWF’s Blue Panda boat anchored in Zakynthos, a web lab on tourism put the spotlight on the consequences of mass tourism and ways to minimize its impact on the island. 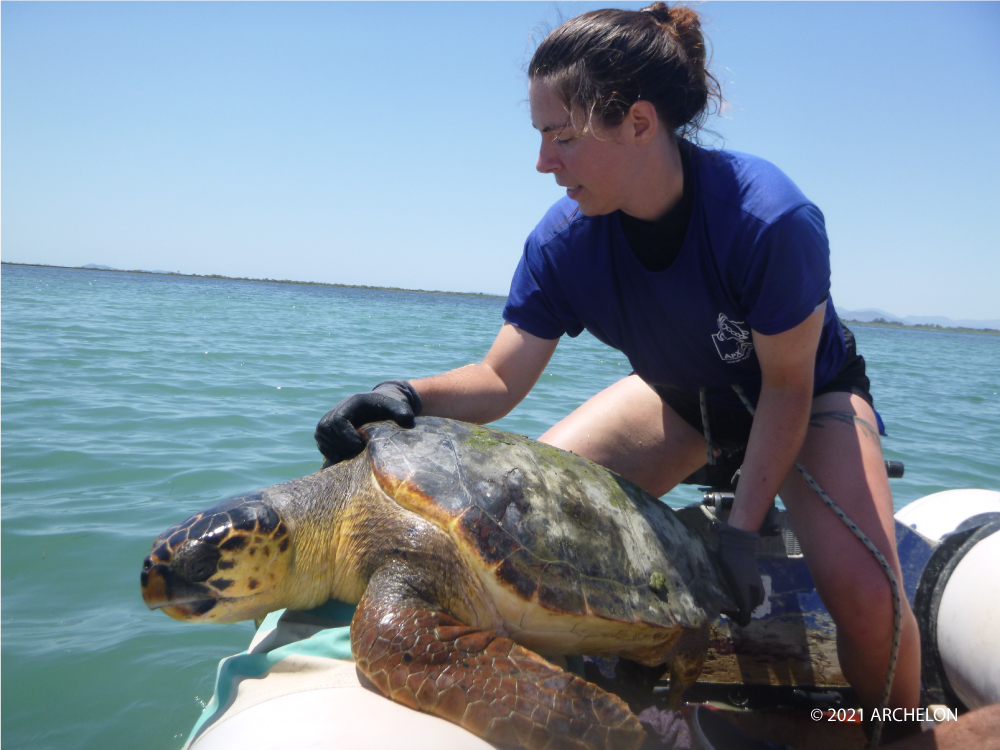 Although official nest numbers for 2021 are pending, Zakynthos National Marine Park has confirmed that 2021 is looking like a good year for turtles. More than 1,300 nests were confirmed in Zakynthos, well above the mean nest number of the rookery for the last 20 years. In addition, in the coming months the marine park will finalize and present the task of processing management data and of designing an adaptive management tool.

Zakynthos is also the location of another important nesting beach, Sekania. During the 2021 nesting season, Sekania hosted 589 loggerhead nests out of 1,319 nests in total (based on ARCHELON and National Marine Park monitoring), confirming its pivotal role. 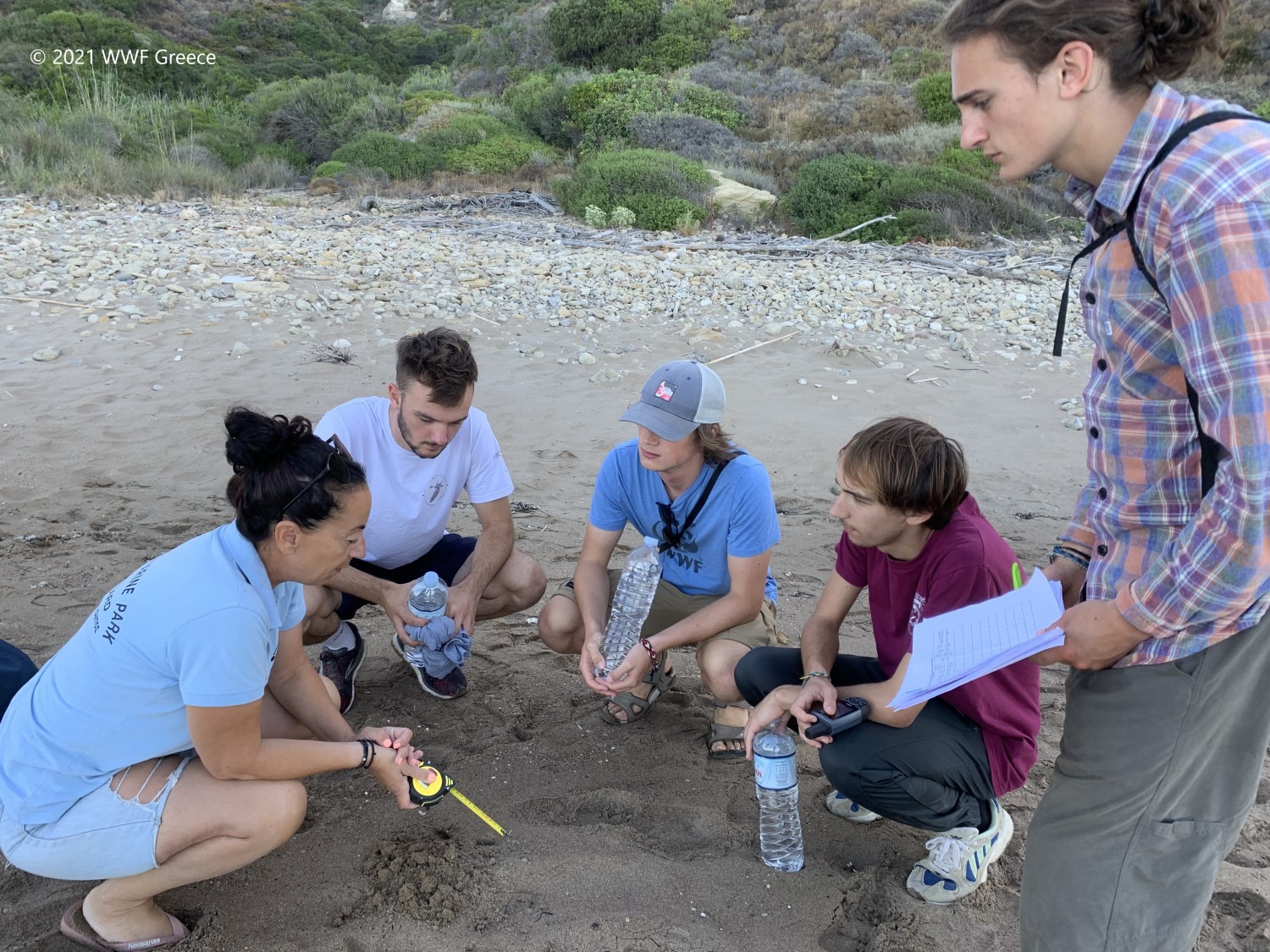 Moving eastwards, Turkey hosts important nesting sites for both Loggerhead and Green turtles. Akyatan is a wildlife development area under protection status since 1987. The lagoon, forest and surrounding sand dunes, which cover an area of about 11,300 hectares, host a great variety of fauna and flora. Green turtles are famous summer visitors to the beach. A field survey was carried out by WWF Turkey, during the marine turtle nesting season, from June 1 to September 15, in collaboration with the regional directorate of the Ministry of Agriculture and Forestry. It identified 434 nests (24 loggerhead and 410 green turtle nests). Cages against jackal predation were placed to protect the nests.

This summer, vegetation mapping on Akyatan beach  by also commenced. Showing the relationship between Green turtle nest use and vegetation will support local government in its spatial planning. 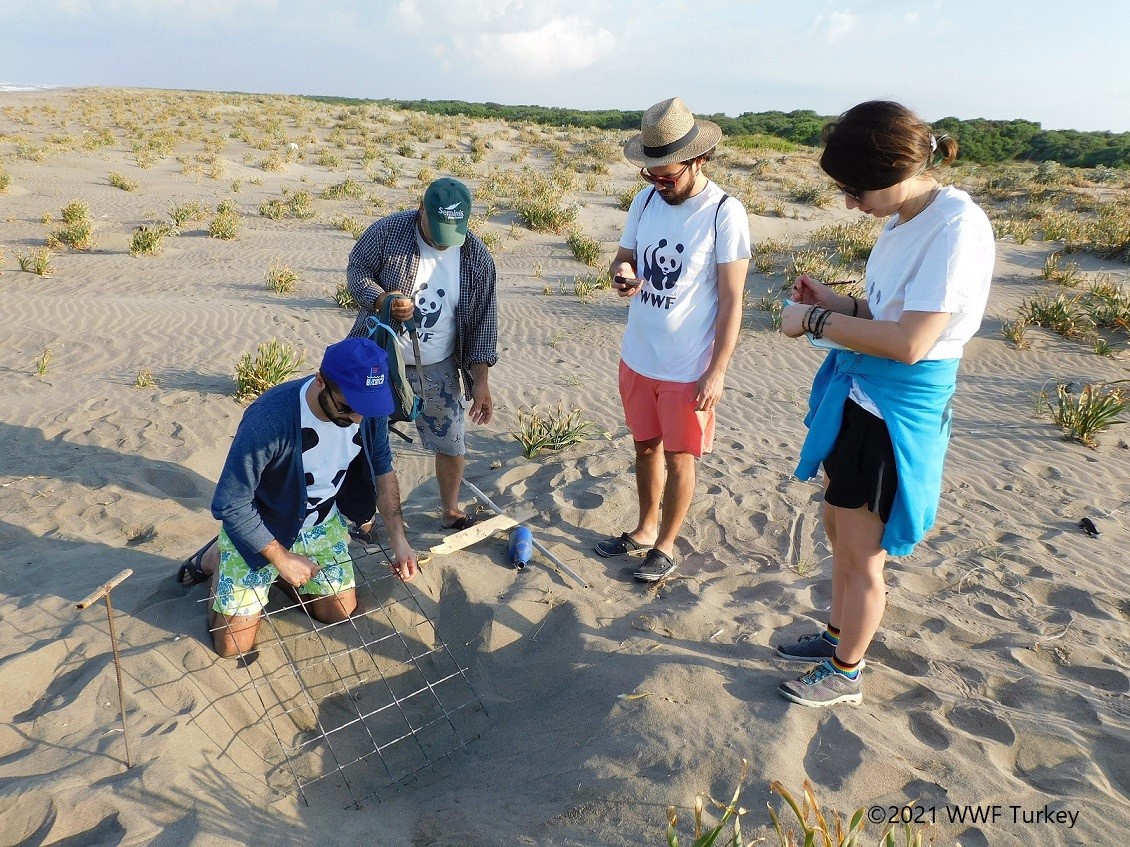 In Dalyan, Iztuzu beach is a popular spot for loggerhead turtles. DEKAMER, which monitors the area, has been operating the Sea Turtle Research, Rescue and Rehabilitation Center since 2009. As DEKAMER’s founder and director, Dr Yakup Kaska, said: “2021 was a difficult year due to the Covid-19 pandemic. Nevertheless, 150 DEKAMER staff and volunteers, who over 150 nights covered around 15 km per night, worked hard to patrol the beach around the clock day and night, covering 337,500 km in total. They recorded and protected nearly 1,000 nests. Additionally, we were able to look after 50 injured turtles and conducted autopsies on 100 stranded turtles.”

Heading south, in Tunisia, the Specially Protected Areas Regional Activity Centre (SPA/RAC) of the UN Environment Programme/Mediterranean Action Plan, succeeded to establish national networks composed by well - trained scientists, MPAs managers and volunteers in Algeria, Tunisia, Libya, Egypt and Lebanon. Indeed, national nesting and stranding programmes have been implemented through the application of harmonized protocols, in line with guidelines developed under the Barcelona Convention. The project has also been an opportunity to promote applied research and more than 250 data loggers have been deployed to monitor the beach temperature. Additionally 500 samples have been extracted from adult and juvenile sea turtles to determine their origin and genetic structure.

In Kuriat island, the main Caretta caretta nesting area in Tunisia, nesting activity of sea turtles is in continuous progression, thanks to the well-coordinated efforts of its co-management unit (APAL, NGB).This year the number of nests has almost doubled compared to 2015, rising from 20 to 44 nests.

The SeaTuMed sub-project, a communication programme, launched by WWF North Africa, brought together more than 15 NGOs to protect sea turtles and engage people in their conservation through targeted awareness-raising activities. 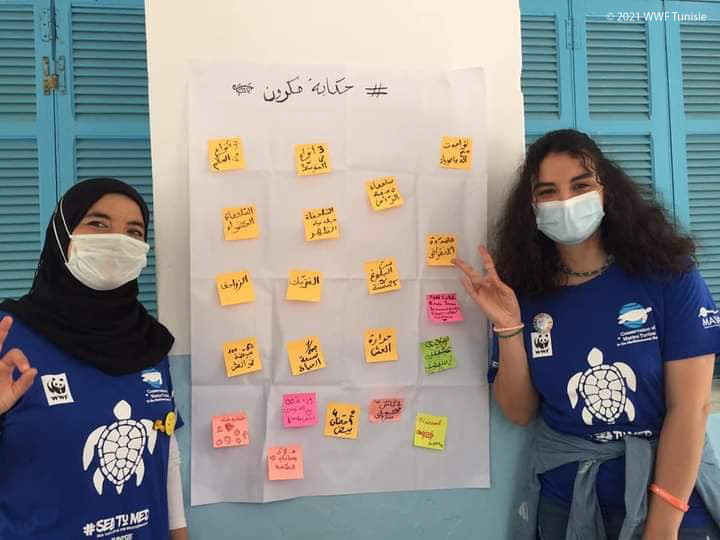 Some would ask, why the fuss about sea turtles?

Why do so many people strive to protect this species? Sea turtles have it all: they are umbrella, indicator and flagship species. This means that by protecting sea turtles we are protecting a huge number of other species and habitats at the same time, some of which may not be as emblematic or grab the public’s concern and attention to the same extent. And, if sea turtles aren’t doing well, that means something is not going well on the beach or at sea, or both. Their status can serve as a wakeup call. Not to mention that they also help maintain a balance in marine food webs, while circulating nutrients from water to land, and preserve the ecosystem balance by maintaining healthy seagrass beds and coral reefs that provide key habitats for other species.

It makes sense to be a turtle “hero” after all.

Editors: Conservation of Marine Turtles in the Mediterranean Region Partners 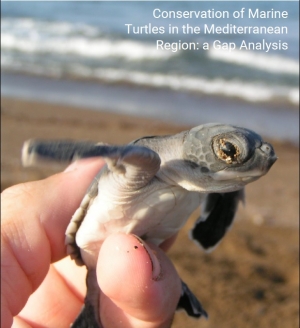 This publication is produced by SPA/RAC - UNEP/MAP in the context of the project "Conservation of Marine Turtles in the Mediterranean Region" funded by MAVA Foundation. The author of the publication is Alan F. Rees .

The purpose of this publication is to provide an overview of the existing sea turtle monitoring activities in the Mediterranean, to identify the gaps in conservation efforts and to provide solid recommendations on how these gaps could be filled. 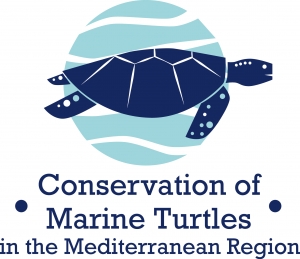